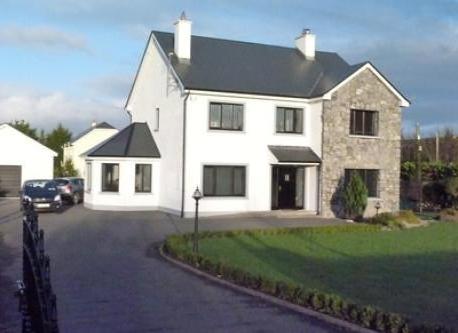 House in Galway, in the west of Ireland

Our home is located in a rural village, Corrandulla, 11 km north of the vibrant city of Galway in the west of Ireland. We are close to local amenities such as shops, petrol station, post office and pub, and a short (30 min) drive to the heartland of Connemara, which is full of beautiful scenery and wild rugged mountains. We are also a short (1 hour) drive to the famed and popular town of Westport in Co. Mayo, and 20 mins drive to the main Dublin-Galway Motorway, with Dublin itself being a three hour drive away. Heading south we are 80 minutes from Limerick city, and less than an hour from the Burren and the Cliffs of Moher of Co. Clare. Galway itself is a lively city which has much to offer visitors, including good restaurants, pubs, Irish music, golfing and beaches...but can be better described by looking up any website about the West of Ireland. Galway is the designated European City of Culture 2020,and has many spectacular events planned for the year.
Our house has five bedrooms, two specifically for children, and a well equipped kitchen with all modern conveniences. We have a large garden, and a sheltered outdoor seating area.
In our family we are two adults and two children (17 and 14). We work as secondary teachers, and so generally are available for a simultaneous house swap in August, but also sometimes during the Easter break. A car would also be available, as well as bicycles, and lots of toys, games and DVD's and PlayStation. WiFi is available throughout the house. We have so far made five very successful and highly enjoyable exchanges to Germany, France and Spain.